Ron Heiss was a successful recording artist, producer and song writer over a span of five decades. In the 1960's he penned songs for groups such as the Challengers, Travelers, Grand Prix, The Innocents, Mary Saenz and many others. His recording career started while as a junior in high school. In 1959 Premier Records in Tucson, Arizona released two of his recordings. The 45 was an instant smash, becoming very popular locally. His follow up record in 1961 was released on the Keeson Recording record label. For this 45 he would change his recording name to Ron Lee. In 1973 he recorded a 45 under the name of Lee Carleton on the Saguaro Record label. Ron was very kind to write me and to provide a brief glimpse of his early musical career. I gladly present his story on the blog along with the song "Far Away" that I recorded from his second 45. It was the B side, I would describe it as a powerful teen lament ballad. 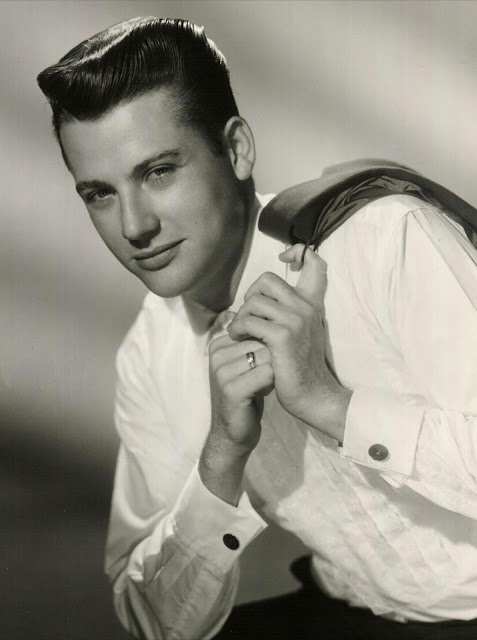 Ron Heiss
Music and performance began for me when, as a child, my mother would dress me up as a cowboy, place me in front of  a record player and ask me to sing. Of course, my parents would always enthusiastically applaud to express their approval and that seemed to be all the encouragement that I needed. It was not until we moved from LaPorte, Indiana to Tucson, Arizona, that I began to feel the effects of a certain musical chemistry which existed in this new environment. Since I played the trumpet in the marching band, I didn’t feel that learning to play the guitar would be that difficult to master. 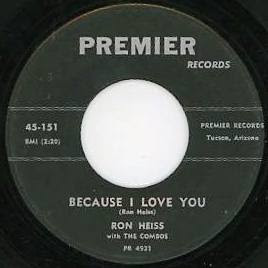 After imitating some of my vinyl heroes Ricky Nelson, Johnny Cash and Roy Orbison, I decided to compose some original songs. It was during my junior year at Catalina High School that I decided I would create my own record label as well.  Premier Records was born in 1958 as well as two songs, in particular, that I wanted to record: “Because I love You” and “She Said No”. The next step was to find a group that could provide the necessary instrumentation and vocal backing that I had envisioned. I eventually found the perfect group who had been playing at the Monte Vista Lounge on Speedway, and they called themselves The Combos. Mike Lacy was the group leader, and he fulfilled all of my expectations.  After a number of highly structured rehearsals, we were ready to make our way to Phoenix and lay down our tracks at Audio Recording utilizing one of the best technicians in the southwest at that time: Jack Miller. Duane Eddy was also  recording there when he was still with Jamie Records. In two and a half hours, my first two tracks were complete and two acetate dubs were cut. After designing the record label, getting an initial 500 copies pressed and arranging for a Southwestern record distributor, the next step was to contact KTKT radio (Tucson) in an endeavor to secure air play. I quickly discovered that they were more than willing to give a novice artist some exposure to the local airwaves. This lead to various appearances at several High Schools as well as an appearance on Arizona Bandstand, southern Arizona’s answer to the national American Bandstand. Just when “Because I Love You” started to receive a considerable amount of recognition, it was time for me to attend basic training at Fort Ord, California. I had joined the Army National Guard as a junior but was given a deferment until I graduated from High School.

My next recorded effort began late in 1960, not very long after returning from basic training. Keeson Recording Ltd. agreed to produce two songs entitled “Come a Little Closer” and “Far Away”. The owner of the label and I selected the studio musicians to be used for the recording session. I started to work toward a B.F.A. in Drama Production at the University of Arizona during the same time frame and readily recall one of my peers announcing, at a play rehearsal, that “Come a Little Closer” had just been selected as Pick Hit of the Week on KOMA radio out of Oklahoma City. Obviously, I was pleased to hear the good news because that station was extremely strong and could be heard at night in western states. 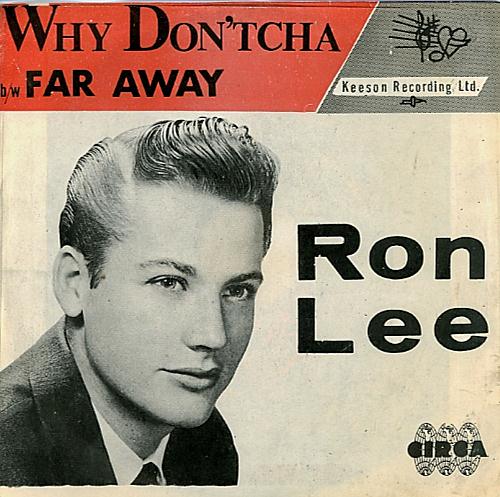 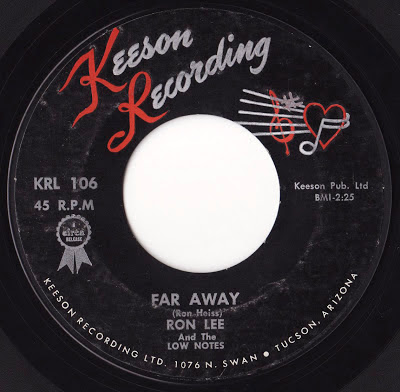 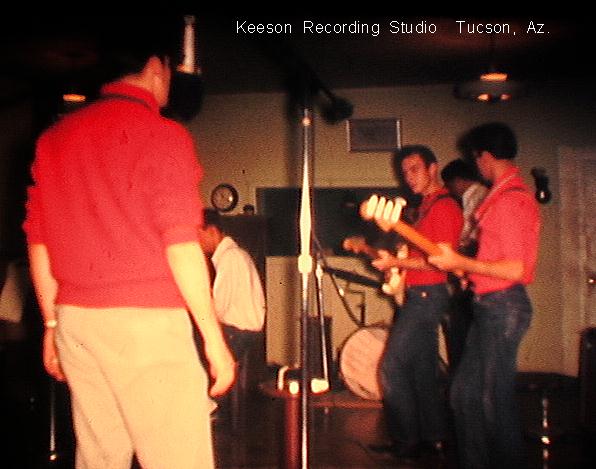 In addition to my recording and live theatre interests, I was also drawn to movies and television.  At that time Tucson was considered a mecca for western movies because we had the streets of ‘Old Tucson as a backdrop. I did a lot of work in front of the camera on films like Return of the Gunfighter with Robert Taylor and Chad Everett or the T.V. show Route 66 in the “How Much a Pound is Albatross?’ episode with George Maharis and Marty Millner, just to name a few. Early in 1961, I had occasion to visit Dave Nelson at KTKT Radio who suggested that I go to Hollywood/L.A. and see Jim Lee of Indigo Records because he was looking for artists and material for his label. I followed his advice and did just that. Sitting in his office on Barham Boulevard in Burbank, California, Jim Lee decided that “Because I Love You” would be The Innocents’ fourth single release following songs like “Honest I Do” and "Gee Whiz". The result was a date with the top 40 on Billboard and Cashbox as well as a double sided hit with ‘Beware’ on the flip side. This Indigo release represented a major step in my music career owing to the fact that it established credibility for me as a songwriter.  I returned to Tucson, but it was not long before I met Tex Hughes who shared my passion for songwriting. We decided to return to  California and try our hand at writing for other artists. 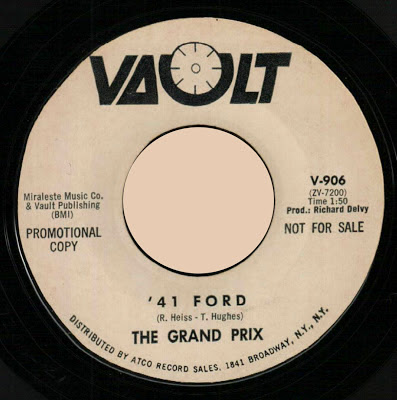 1963 produced songs like ‘Chu-sen-ling’ written with Fred Stryker of Era Records and ‘He Didn’t Even Say Hello’ recorded by Mary Saenz, also released on the Era label. Mary was also from Tucson and a girl that I use to date back in High School.  She would eventually record on Decca Records and work with Gary ‘Alley-Oop’ Paxton.

I owe a dept of gratitude to people like John Marascalco (songwriter for Little Richard and Elvis Presley) and Richard Delvy of The Challengers who, with John, were responsible for one of the most popular instrumentals of all time "Wipe Out". Bobby Hart "I wonder What She’s Doin’ Tonight?" who helped us  brainstorm two songs "41 Ford" and "Goin 88" for the Hot Rod City album released on Vault Records in 1963.I’m also sure that Tex remembers being in the Gold Star recording studio watching Phil Spector lay down a track or Donnie Brooks "Mission Bells" helping us get a start in the business. Meeting Sonny and Cher when they were still Caesar and Cleo was another memorable moment. The single "Hot Rod Hootenanny" was a song that Tex Hughes and I wrote that was recorded by the Challengers. It was released in 1964. 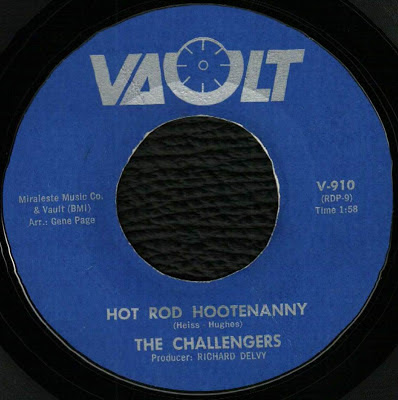 After another return to Tucson, I had occasion to meet and partner with Ron Story (lead guitar of The Travelers).  We produced quite a few records together on the Yellow Sand, Whirl and Knight labels under Heiss and Story Productions (1964-65). Ron and I spent quite a bit of time in Hollywood as we cut deals with the Vault and Princess Record labels, and I have no doubt that ‘Spanish Moon’ will remain one of my favorite instrumentals of all time. In fact, Ron even co-wrote an instrumental with my mother, Edna Heiss, entitled ‘ Melody of the Moon’. 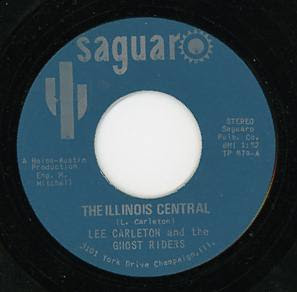 In 1967, I finally graduated with a B.F.A. in Drama Production from the University of Arizona.  From there it was a Master’s Degree from Ball State University and Ph.D coursework from the University of Illinois and the University of Washington. I released a record  in 1973 under the name of Lee Carleton and The Ghost Riders on my Saguaro Record label. "The Illinois Central" and "No Word But Lonely". were the songs on the 45. It was a Heiss-Austin Production which resulted in quite a bit of air play as well as the T.V. special. George Austin was my partner in this venture and was the drummer for The Ghost Riders. I was attending the University of Illinois and working for the newspaper at the time. The dishwasher at the restaurant that I frequented was the inspiration for "The Illinois Central". We played such places as Prairelands which was the largest venue in that region of Illinois. I retired in 2006 after 35 years as Director of Drama at Spokane Community College teaching Speech, Drama and Film. After all this time, I can honestly say that those early years in Tucson and Hollywood were the most exciting and rewarding years of my life.
Posted by johnnie o at 11:09 PM

johnnie o
Many groups recorded on small or regional record labels. As the years have gone by these artist accomplishments have been in some cases forgotten. My blog is a humble attempt to remember and learn more about them. I post what information that I have found from books and other various places. In some cases it is very little. I welcome any information or photos of the groups that are featured to help to better remember them. I can be reached at artyfactsinwax@hotmail.com The intention of this blog is not to gain any money or to reap any profits. The recordings from the 45's are not professionally done, but they do showcase how talented they were. I encourage you to go out and buy the artist records for your collection. If any artist featured on this blog wants their material removed, please contact me via this blog, and I will remove it.